Sanctuary of the Miraculous Lady of Sinj (1)

The Croatian people have always worshipped the Blessed Virgin Mary and in tribulations they have prayed for her help. They have trusted in her heavenly intercession, honouring her in token of their gratitude as the Queen of the Croatian people. They have also invoked her through history as Fidelissima Advocata Croatiae (the most devoted Advocate of Croatia).

In Sinj, one of the greatest Marian sanctuaries in Croatia, a celebration of Feast of Assumption on 15 August is given the special solemn significance. A vast multitude of pilgrims comes to Sinj with only one aim - to kneel with hands clasped in front of the Miraculous Madonna of Sinj, to bow in silent prayer and gratitude to heavenly Mother, to light a candle before the Image of the Madonna and open their hearts to her grace. Many people from far away vow to pilgrim barefoot or just on foot. The day before the celebration, užežin, Sinj is already crowded with people and the hubbub, making the streets and the Church too narrow. The first mass is celebrated at 4 a. m. At 7 a.m. the sacred votive mass is celebrated in the small church at the Old Town, thus reviving the feeling of gratitude to the Madonna for having delivered us from enemy's yoke and for comforting us in many temptations. The old fortress is resonant with the song of worship The Madonna of Sinj,

Holy Virgin, God has glorified you wonderfully, wonderfully, voices of the entire world celebrate you, dearest Mother of your people... At 9.30 a.m., accompanied by the solemn ringing of bells and the sound of fanfare, the Image of the Miraculous Madonna of Sinj is taken out of the Church to be brought into a solemn procession through the streets of Sinj. It is a great honour to carry the Image on one's shoulders. It is carried by the Alkari, the Alka squires, policemen, members of the Croatian Army, firemen, members of the Association of Croatian volunteer combatants, members of the Association of Homeland War veterans and volunteers, members of civil associations, nuns and Franciscans, bandsmen, girls in folk costumes, mayors and benefactors of the Sanctuary of the Madonna of Sinj. Cannon balls (mačkule) are fired from the Old Town fortress, thus indicating the benediction place. The people of Sinj sprinkle flower petals from the windows on the Madonna's path. Accompanied by the prayers of the rosary and liturgical songs worshipping the Madonna, the Image is brought back to the square in front of the Church where the holy mass is celebrated (at about 11 a.m). In the evening, the mass is also celebrated in the town square (usually at 6 p.m.). Feast of Assumption is further celebrated as the Day of the Town of Sinj.

Church of the Miraculous Lady of Sinj

Peaceful and majestic, framed with the bronze door in relief made by the academic sculptor Stipe Sikirica, the Church of the Miraculous Lady of Sinj dominates the town main square. Built during the 1699-1712 period, it has preserved its original appearance, though many times damaged resisting wars and earthquakes.
The Image of the Miraculous Lady of Sinj takes the central place, both in the Church and in the hearts of the people of Sinj. It is a work of an unknown painter, dating back to the 15th or 16th century. With her head slightly tilted and eyes lowered, she has devotedly watched over her people, ever since they, driven off by the Turks, brought her along from Rama as the greatest treasure and hope to the Cetina Region. The defenders and franciscans believed that in 1715 Sinj was once and for all delivered from Turkish rule with the help of her miraculous influence.
In token of gratitude, the people of Sinj crowned the Image in 1716 with a golden crown, on which there is an inscription reading IN PERPETUUM CORONATA TRIUMPHAT - ANNO MDCCXV (Triumph crowned in eternal – the year of 1715). The Image is nowadays silver-framed, with a relief of Sinj fortress on the back (by the sculptor Ante Jakić), adorned with votive offerings of worshippers.
In addition to the Madonna's altar, in the Church there are altars of St Joseph, St Francis of Assisi, St Anthony of Padua, St Nicholas Tavelić and St Paulin.
A stone altar, the work of the academic sculptor Kuzma Kovačić, stands out in the presbytery, as well as stained-glass windows made by the academic sculptor Anton Vrlić. Above the entrance door, there are stained-glass windows showing Assumption of the Blessed Virgin Mary and the images of Father Pavao Vučković and St Nicholas Tavelić. The side walls of the nave show the works of the academic painter Ivan Grgat, these being the images of evangelists, Blessed Alojzije Stepinac and Venerable Ante Antić. Behind the main altar, there are a mosaic and a stained-glass window showing the crowning of the Blessed Virgin Mary and Christ on the cross, the work of the academic painter Josip Botteri Dini.
In the inner church courtyard, there is a bronze relief by Kuzma Kovačić, showing the Image of the Lady of Sinj crowned with twelve stars. The relief is the same 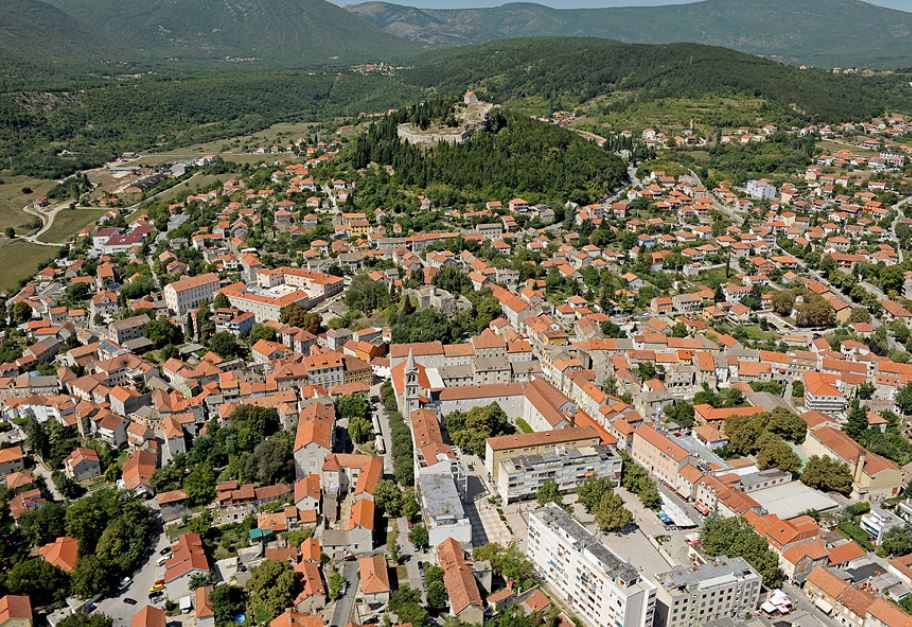 as the detail on the door of the Franciscan church at Šćit in Rama (Bosnia and Hercegovina).
The today's church tower, which consists of four new bells and is 43.5 metres in height, was completed in 1927. It was built in the place of the old tower, dating from 1775. In 1958, new organs, made by the Franc Jenko firm from Ljubljana, were inaugurated. The Church itself was consecrated in 2009, together with the new altar (also was blessed the Madonna's statue placed in the monastery courtyard, made by the academic sculptor Josip Marinović). Both the Church and the Franciscan Monastery are included in the Register of Cultural Property of the Ministry of Culture of the Republic of Croatia as a part of the sacral architectural heritage under protection.

Stations of the cross at the Old Town

From the foothill to the votive church at the Old Town the Way of the Cross is built. Stations were sculptured by the most prominent Croatian sculptors and blessed by Franciscan provincial minister Joško Kodžoman in 2016.

As the oldest secondary school in the hinterland, it started work in the academic year of 1838/39. Through the 1854 reorganisation it acquired the right of public work. Sinj Franciscan Grammar School is also the first secondary school in southern Croatia which introduced the Croatian language as a language of instruction.

More informations about Sinj and Cetina region: Sinj Tourist Board